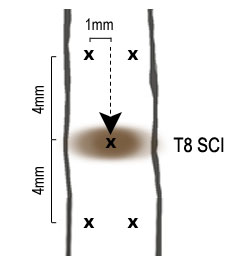 Figure 1: Injection site in the injured spinal cord of hES-OPC cells.
DT-MRI has allowed for major advancements for studying specific pathways of the CNS. The technique is based on the diffusion principles of water and enables researchers to investigate and map specific pathways and microstructures of white matter by measuring water diffusivity along defined regions of interest (ROIs). Normal water diffusion is isotropic such that molecules diffuse non-preferentially in all directions of 3D space. However, structures such as axonal fiber tracts are able to guide the diffusion of water molecules such that they preferentially move in specific directions parallel to the tracts, or anisotropically. New acquisition techniques such as echo-planar imaging allow for reductions in motion artifacts, improved spatial resolution, and the construction of 3D neural pathways through the spinal cord for quantifying the amount of spared pathways following SCI.

Figure 2
Figure 2: (a) Comparison of traditional T2-weighted MRI (top) and the color map generated by diffusion tensor MRI (bottom). Blue indicates water diffusion in the axial direction (perpendicular to the image plane). (b) A representative DT-MR image of fiber tracking showing the dorsal (red), lateral (green), and ventral (blue) pathways in an injured rat that received OPC transplantation after the contusion.

In this study, we utilized diffusion tensor imaging (DTI) to visualize the spinal cord white matter axonal fibers ex vivo up to 100 days after induction of a moderate contusion SCI in rats. We illustrate how DTI provides significant benefits over traditional T2-weight MRI and show how DTI can be used to evaluate the extent of axonal damage and subsequent repair, based on fractional anisotropy (FA). Finally, we show that DTI is a powerful tool for evaluating OPC transplantation therapy for SCI. We used bioluminescence cell tracking to verify cell survivability in conjunction with electrophysiology to show potential functional improvements, both of which corroborate our DTI data. Our data provides preliminary work for further studies of OPC therapies, and demonstrates how these techniques can be used to evaluate the long-term effects and benefits such therapies in a rat model of contusive SCI.

Figure 3: (a) FA of ex vivo spinal cord segments. Left: FA values across the entire extracted segment; peak minimums at x=0 correspond to the epicenter of injury and are clearly visible at day 10. FA of laminectomy remains near 1 indicating that axonal pathways were not injured. Right: bar plots of FA peak minimums; FA is increased in the lateral and ventral columns after 100 days following OPC transplants compared with no treatment at day 10, which may be due to remyelination of axonal pathways after SCI. (b) BLI verified survival of transplanted luciferase-transfected OPCs up to 100 days. Left: schematic showing location of T8 injury and representative bioluminescence images for one rat; right: quantified results for OPC-treated (n=3) and laminectomy controls (n=4).