If you are interested in learning more about BCI projects, please visit our collaborator Dr. Nitish Thakor's The Neuroengineering & Biomedical Instrumentation Lab. 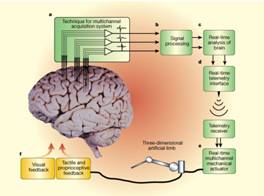 A schematic of brain-computer interfaces
In the past decade, inspired by the remarkable advances in neuroscience and electronic technologies, several research groups around the world have begun to develop brain computer/machine interface (BCI/BMI) that provides direct communication and control channels between the brain and the external world. The action potentials of single neuron spikes or scalp electrical signals are collected and translated into commands that move robot arms, wheelchairs, and cursors on computer screens. Researchers are now working on a variety of next-generation neuro-prostheses, including vision prostheses for the blind and brain-computer interfaces for totally paralyzed individuals, which can be considered "output channels" of the brain. On the other hand, "input channels", by using electrical brain stimulation to deliver both "virtual" tactile cues and rewards to freely roaming rats, have allowed researchers the ability to remotely instruct animals to navigate through complex mazes and natural environments Through two-way BCI, we are trying to understand the mechanisms of the brain by building artificial communication channels. Here we are exploring the possibility of establishing a direct brain-to-brain communication channel, which may be a pilot work for two-way brain prosthesis.

This project is a prototype of brain-to-brain communication. We have developed prototype hardware and software to wirelessly transmit human brain signals to experimental subjects to further understand two-way brain prosthesis. 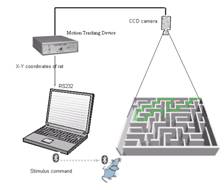 A schematic of the protocol 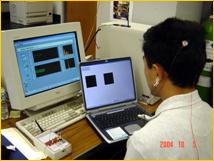 An experimenter sending signals to the device