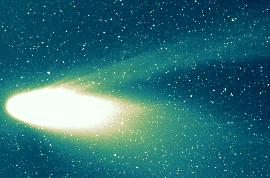 In the Northern Hemisphere, the best time to view the comet will be shortly before dawn and shortly after sunset from late March to mid-April. From March 26 through April 8, the sky will be free of moonlight after dusk, making it easier to see the comet at the time when it will be at its brightest. It will set about an hour after sunset, making it visible for a short time each night.

The comet should be viewed from areas far away from city lights. People should look to the west-northwest, near the horizon, about 45 minutes after sunset for their best view of Hale-Bopp.

Go back to Previous Page

Go Back to JHUNIVERSE Home Page